How to Get Rid of Bedbugs

Bed Bugs are a common pest in New Zealand and the number of cases where we are called to treat this situation is increasing. There are a few suggestions as to why this is the case, actually it is likely a combination of reasons.

Why are Bed bugs an issue?

Bed bugs are great travelers, often they are transported in luggage and most people who have an issue with this pest have recently traveled or have had some one stay in their home who is from overseas. They live and multiply well in the New Zealand climate. It is commonly assumed this pest will be found in cheaper accommodation such as “backpackers” although this may be true, the finest hotels around the world are not immune. They do not need to be in insanitary conditions to thrive. We receive many calls for this pest from residential properties in Auckland and have seen plenty of confirmed cases.

Are bed bugs difficult to eliminate?

Bed Bugs can prove a challenge to get rid of, there is documented evidence from controlled studies in laboratories which prove for various reasons that bedbugs are highly resistant to common of the shelf insecticides. This presents problems with both Professionals and DIY pest control.

Insecticide resistance has been observed in the field in China where bed bugs continue to be a persistent issue as with many other developed countries including New York. Natural insecticides and off the shelf product will struggle to kill Bed bugs and their larvae, like a Cockroach is well known for the ability to survive in even inhospitable climates, it is similar for this pest, their instinctual nature is to reside and nest where they are well protected from attack and this plays an important role in their survival. They also have a thick skin which prevents penetration of insecticides as well as biological resistance to insecticide chemistry.

How will EcoSan eliminate bed bugs?

Antibiotic treatment has shown to be very effective with the control of Bed Bugs in Auckland. Many Pest Control Companies in Auckland will use Class 6.4 B insecticides which require a compliance certificate and not available to all Pest controllers and cannot be purchased at hardware store. These products can be harmful to humans, however the use of common insecticide is not effective enough.

Due to the toxicity of 6.4 B chemistry EcoSan Solutions uses Antibiotic formulations. These products are not an insecticide group and have no resistance issue with Bed Bugs. They have residual qualities which match or exceed residual insecticides.

Antibiotic also has the the affinity towards killing not just adult Bed Bugs but also their Larvae. Insecticides do not kill Larvae regardless of how toxic they are.

These products are not toxic like insecticides so require less down time before re entry into the treated area provided sufficient ventilation is available.

EcoSan Solutions can treat your home or business to properly eliminate this pest. We utilize treatments which will control the full life cycle of the pest. In all cases we used Antibiotic to control Bed Bugs in Auckland, this pest has not returned to the area we have treated. Experience and method plays an important part in successful application.

Where all three of these treatments are followed – bed bugs will be eliminated successfully.

Should I be concerned about chemical control used?

Yes, chemical solution should be utilized only where required. The treatment of bed bugs will require the use of these controls. The NZQA standard for the treatment of bedbugs allows many different registered controls for bedbug treatments. Many of these are not allowed to be used on mattresses.

There are purpose designed chemicals for this purpose in New Zealand. Professional approach to these applications will mean they are applied correctly, at the allowed strength in the right place. It will also minimize the need for repeat treatment, therefore mitigating the use of insecticide at the minimum.

Is there an organic solution?

Diatomaceous earth powder or Naturally sourced organic insecticides are sometimes recommended for the control of Bed Bugs. These applications will have limited effect on Bed Bugs and could contribute to further resistance to common insecticides resulting in the use of more toxic product down the track. Bed Bugs are best controlled with professional help only. The solutions EcoSan provides will not put your family, pets or the environment at risk.

Preparation prior to a bed bug treatment

Contact EcoSan today to get rid of these Bed Bugs and provide solutions to keep them away.

Ecosan is committed to our customers and their safety. We are constantly working to maintain the most environment friendly pest control methods available.

What are Bed Bugs?

Bed bugs are parasitic insects. The common bedbug, Cimex lectularius, is the most well-known species of the family. The name of the “bed bug” is derived from the insect’s number one habitat of houses and especially beds or other areas where people sleep. Bed bugs are mainly active at night but are not completely nocturnal and are able to feed on their host without being noticed.

A global bed bug epidemic, is it declining?

Since the year 2000 reports of Bed bugs throughout the Americas, Europe and China have been fast growing and public and consumer awareness increasing. This period coincides with the ban of a widely used insecticide in the Organic phosphate group. Acetylcholinesterase inhibitors do not allow resistance in the Bud Bugs and were very effective in their control.

Not surprisingly, the epidemic is spreading around the world as tourists and workers travel abroad constantly. Here in New Zealand there is already a vast population of Bed Bugs which have taken hold. Once a simple saying said at bed time, Dont let the Bed Bugs bite, now takes new meaning.

It wasn’t so long ago, when insecticides in the 50’s like DDT were able to wane the spread and discomfort caused by this insect, nowadays we see resurgence in numbers. Recent surveys strongly demonstrate, despite a large scale effort recently, to train and qualify technicians and pest management companies to deal with these unwelcome residents, the insect’ persist still.

A recent survey among registered pest management professionals across the globe has cleared up many questions about this quickly becoming infamous pest.

Bed bugs do not just live in mattresses and beds as the acquired title bed bugs seem to suggest.

Though bed bugs are more active and feed on their host at night, it has been highlighted bed bugs do not live only in hotels and back packer lodges. 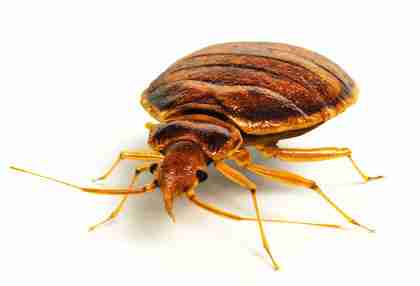 As represented in the data collected in a survey conducted by the NPMA an American Pest Management Association, it is not difficult to see how anyone can be found to have an infestation of this insect, even when not using the services of hotels or the like.

The figures compared with previous year’s data suggest the trends are not decreasing overall. Though commercial accommodation facilities have dropped in occurrence overall, they are still the predominate complainant of sightings and solicitation for insecticide treatments. The other centers mentioned in the data have almost all increased across the board.

It is important to take into account, these increasing numbers which are being observed is with current pest management techniques being employed to combat this insect population increasing. Persistence in controlling this insect is very important, just imagine if everyone stood back and made little effort to control Bed bugs, their ability to multiply and migrate would mean exponential increase in numbers.

If you feel you have encountered this pest, it is best to consult professional advice. Bed bugs are adept at survival and seeking experienced help to control bed bugs can prevent an isolated situation from developing into a more costly exercise to control.

We’re more than happy to help, so if you know someone who may have bed bugs or require information on how we can help you control this insect, contact us today.

Your Bugs will be dying to meet us!